A Slice of Humble Pie: Bringing Some Perspective to the Training Debate 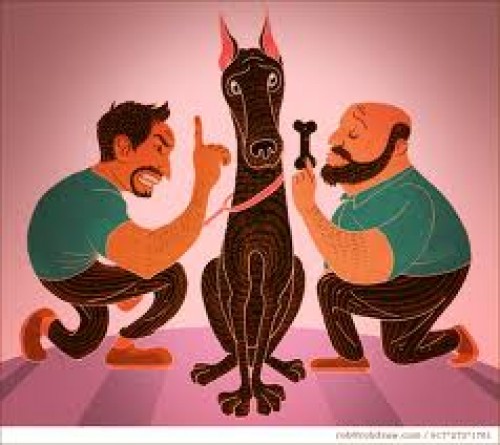 Before I even get started on this post, I feel like I should let everyone know that it might ruffle a few feathers…or raise a few hackles, as it were.  As a trainer, I’m on a lot of “pages”.  I belong to a good number of “groups”.  I have membership in all the best “clubs”. I haven’t failed to notice, as I’m sure is the case with most of my readers, that there is a growing and bristly war going on when it comes to ideologies.

What I’ve noticed disturbs me-and not just a little bit.

I know we’re all sick of hearing about him, but I’d like to use Cesar Millan’s show in order to demonstrate what I’m seeing.  When I first started out, people would gush about him.  How they loved his philosophies and techniques…not to mention his Mexican spice.  I’ve noticed a shift, and it’s not for the better.  When people mention his name around us dog professionals they’ve become increasingly “appeasing”.  It’s like they’re afraid that if they tell us they like him they’ll be hit with a taser and a swift correction with a prong collar.  Even my own friends will say “oh don’t get her started”, when someone brings up his name.

This can’t be good.

I’m not really interested in going on about how we should be respectful of everyone’s opinions and points of view here.  This isn’t a “come to Jesus” moment.  I’m also not planning on having some kind of passive resistance protest in front of stores that sell his merchandise.  What I am interested in doing is bringing some perspective to the situation.  I think (and I can only speak for myself here) that being based in science doesn’t mean we can use Skinner like some kind of battering ram against our “opposition”.

Just because we’re based in science doesn’t mean we know everything.  I know this might come as a shock to those of you who think I’m always right.  Science is always evolving.  Just look at those commercials from fifty years ago that featured doctors smoking in the examination room!  Or what about electric shock therapy? Hell, even Skinner himself frowned on the idea that animals have emotions!  My point is that, as a trainer, it’s probably wise to eat a little humble pie.  We need to stay cognizant of the fact that we are a product of our culture.  We’re limited by what we know and the amount of research available to us.  It could be possible that we might even discover in the coming decades that some of our theories are (take a deep breath) wrong.

Before you all run off and start telling your positive reinforcement trainer that she needs to get off her high horse, I’m not saying we’re not moving in the right direction.  However, I think we sometimes need a gentle reminder that we only know as much as we know.  Even though we love to sit in our glass doggy houses and throw stones, we should take a second and consider that in 30 years, we might be laughing at all that crazy stuff we used to do…and how right we thought we were:)