Are Our Dogs Wired to Cooperate or Dominate? Science Has the Answer! 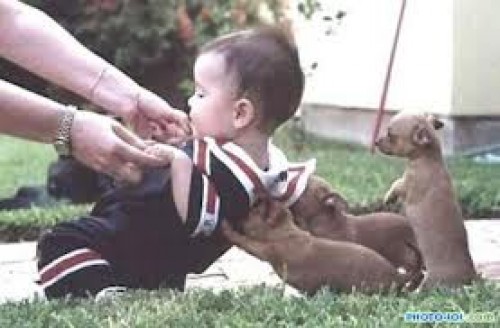 In my industry, and in dog culture in general, there’s always a lot of debate about whether or not our dogs are trying to dominate us.  We’re terrified of turning around one day only to find out that our dog has stolen our job, shacked up with our spouse, and has changed the locks to our front door.  It seems to be a philosophy that refuses to die.

What is is about our culture that causes us to identify so readily with this mindset?

Perhaps we need to look around.  We live in a society where we’re constantly bombarded with the idea that bigger is better, that greed is good, and that it’s every man for himself. A “dog eat dog world”, seems to be the most appropriate expression to use in my case.  Thanks to Darwin, we’re programmed to believe that “survival of the fittest”, is the guiding principle of success in this world.  It’s no wonder that this tendency to view others as competition, as impediments to our own success, would be applied to our dogs.  Not only do we assume they’re trying to beat each other, but we assume they’re trying to best their owners as well.

What a lot of people might not realize is that Darwin in fact, spent a lot of time and research on the aspect of cooperation in the animal kingdom.  This quote from the Descent of Man was found in an interview about Darwin’s surprising interest in the amount of voluntary sociability and kindness found in social groups:

“For firstly, the social instincts lead an animal to take pleasure in the society of his fellows, to feel a certain amount of sympathy with them, and to perform various services for them.  … Such actions as the above appear to be the simple result of the greater strength of the social or maternal instincts than that of any other instinct or motive; for they are performed too instantaneously for reflection, or for pleasure or even misery might be felt.”(“Forget Survival of the Fittest: It is Kindness that Counts”, Scientific American)

Could it be possible then, that not even Darwin would have agreed with the idea that our dogs want complete domination at all costs?

In the animal kingdom, we actually see a LOT more cooperation than we do competition.  According to Danny Grunbaum, an oceanographer at the University of Washington,” “When we see animals like elephant seals fighting with each other—as we do in lots of nature documentaries—we’re really seeing only a very small sliver of time. Much more of the time they’re accommodating each other and respecting where the boundaries are—and that’s cooperation. There is a tremendous amount of cooperation in nature.” (“Birds Do It. Bats Do It”, Greater Good: The Science of Meaningful Life)

What’s this? Are you telling me that animals (and yes, that means dogs) spend much more of their time trying to cooperate and GET ALONG than they do in conflict? While the theory of kin selection states that related animals will help out with rearing the young because their genes will more likely be passed on, it doesn’t explain why there are countless cases of selflessness and sacrifice in unrelated animals; and even unrelated species!

As a trainer this changes everything for me, and as a dog owner, it should change everything for you.  At a very basic instinctual level our dogs are hardwired to try to get along with us. They are not our adversaries.  That’s not to say that many dogs don’t have very serious aggression and behaviour problems.  However, it seems that our approach needs to change.  If even a tiny insect can have mutual cooperation and understanding then why is it so hard for us to do the same with the animals we love?