When Clean-Cut Isn’t so Clear-Cut: The Truth about Shaving Your Dog 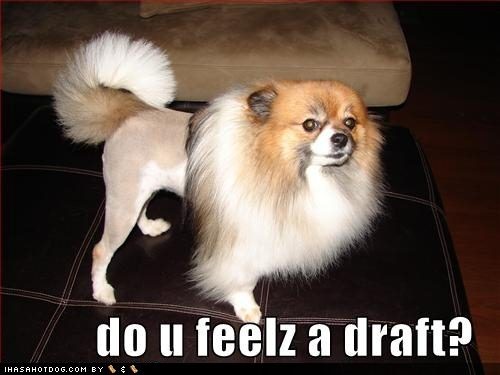 It’s That Time of Year Again.

The flowers are in full bloom, the pools are open and the campfires are a’ blazin’.  Everything’s perfect except for your dog.  He seems to be panting excessively and he definitely isn’t up for his usual two hour sprint through the ravine.  In fact, he seems wilted.  It occurs to you that it might be because he’s wearing a parka 24 hours a day! How can he possibly stay cool when he’s dressed for winter weather? So you decide to put his “winter wardrobe” in its metaphorical tupperware tub…on the groomer’s floor.  The practice of shaving dogs down for their “summer cuts” has become almost commonplace; especially in the city where the lack of water sources makes people especially nervous.  This brings me to the topic of this week’s post-let’s talk facts.

Fact #1: Your Dog Does NOT Need to Be Shaved In Order to Stay Cool

You know all those sweet Golden Retrievers you see running around looking like Mr. Clean? Or those Huskies that you can’t even recognize because they’re missing their hair? While I’m sure their owners are extremely well-meaning they’ve actually done a huge disservice to their dog.  Many dogs have what’s called an “undercoat”.   It looks and feels like soft down underneath that outer layer of hair.  It essentially acts as an insulator; keeping them cool in the summer and warm in the winter.  Think of it as the silver stuff inside your child’s lunch bag.  Without it, your dog has literally no defense against the heat and his chances of getting heat stroke are much much higher.

Fact #2: His Chances of Getting Sunburned or Skin Cancer Are Higher

I know this sounds crazy, but it’s true.  I made the mistake of allowing my Maltese Quincy to get wet a couple of times without brushing him after so I had to shave him down (I like to keep his coat pretty short anyway).  You know what happened? His little pink skin got sunburned!  This is actually way more common than you’d think.  That thick coat is better than an entire bottle of Sunscreen and it’s a lot less messy:)

Fact #3: You May Ruin His Coat

This isn’t necessarily true of all dogs, but the reason lies behind the way that a dog’s hair actually grows.  While Human Beings have only one hair per follicle, dogs actually have between 7 and 25 hairs per follicle…impressive right?  On double-coated dogs like huskies, or German Shepherds, some of those hairs are made up of the soft, undercoat and some are made up of the more coarse, outer layer of hair.  If the dog is shaved too short, then the undercoat will grow in first, preventing the “guard hairs” from being able to get through.  What you end up with is a dog that looks like he’s been groomed with a Weed Whacker.  Not only that, but it can take up to 6 months for the once-lustrous coat to return to its former glory!

Fact #4: It Can Make Black Dogs Feel Even Hotter

This one came up at the park the other day when I was speaking to a client.  We both thought the “black dogs are hotter” thing was a myth.  I was surprised to find out that, yes, black dogs do in fact feel hotter in the summer than lighter coloured dogs.  They should be kept in the shade as much as possible and left at home on especially hot days.  Here’s the catch.  A fellow Trainer named named Renee Devilliers from All About Dogs weighed in on this one and it made a whole lot of sense.  Many dogs that have black coats are in fact quite glossy and shiny.  The function of that is that the coat is better able to reflect the sun, although the dog will still FEEL hot to touch.  When you shave that Top Coat, you’ve exposed the undercoat, which is much duller and less reflective.  So yet again, we leave our dogs more vulnerable despite our best intentions.

So What’s the Best Way to Keep my Dog Cool?

After much research (I even posted on the Dog Trainer’s Coalition Page), I’ve learned that the very best way to keep your dog cool is to brush him! That’s right folks, brush him.  By regularly removing all that dead, matted hair you’re allowing the undercoat to do its job of keeping your dog cool despite the soaring temperatures.  That being said, some dogs really just do enjoy a short cut.  A shorter cut enables you to keep your dog cleaner and you’re less likely to put off the daunting job of getting out that slicker brush.  Just be wise my friends.  Use your discretion.  Don’t make the same mistake I did or you’ll end up with an Aloe-covered hair ball in your living room…that can’t be pretty.