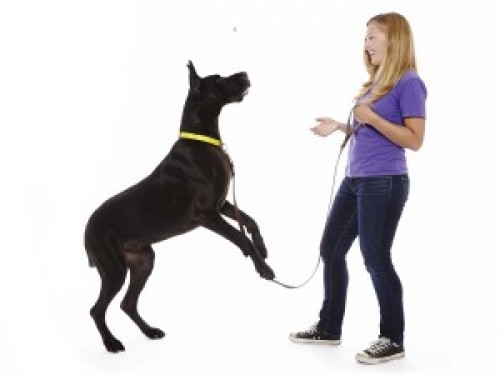 Last week, Danielle wrote a blog about the myths of owning a small dog and shed some really good light on the realities of toy breed ownership.  Since I live on the opposite end of the dog owner spectrum in giant breed territory, I thought it would be fun to write about the realities of living with a big (or perhaps really big) dog.

Large or giant breeds are often called “big babies” or “gentle giants” and for the most part, they really are.  However, romanticising big dogs that way blinds us to the giant responsibilities that come with having one.  The idea of having 150lbs of sweet and lazy to curl up with all day and night is appealing, and let’s face it, the attention you get with a big dog at the end of the leash can be fun.  As much as they are sweethearts, they can also be giant pains in the butt.

While we all know that big dogs are big, sometimes people aren’t truly prepared for how big some dogs actually get.  I’ve heard of people buying great dane puppies, only to rehome them a few months later because – shocker of shockers – they grew up.  If size is something that people are looking for, they have to be prepared to get it.

NOT EVERYBODY LIKES BIG DOGS AS MUCH AS YOU DO (…WEIRDOS!)

Large and giant breed dog owners often have a hard time finding pet care accommodations for their big dogs.  Many boarding facilities, dog walkers, groomers, and even landlords have a weight limit for the types of dogs that they can accommodate.  This makes it really tricky when you are trying to plan a vacation or find a new place to live, and sometimes additional costs will occur.  There are also a lot of places where big dogs might not be welcome simply because their size can be prohibitive or even downright scary: hotels, public transportation, family gatherings, parties, stores, restaurant patios, and the such.

THEY TAKE OVER EVERYTHING

You haven’t had a big dog until you’ve planned your entire living room around where you’re going to put that massive eyesore of a crate.  The beds are big, the food bowls are big, the drool spots on the walls are big, the toys are big (and expensive), and did I mention you’ll probably need a bigger car? Preferably with leather seats?  Big dog pee is also super high in nitrates and will kill your grass forever. I won’t get into what the poops can do to your dignity.  This is why we can’t have nice things.

Nothing is safe, even at the top of the fridge.  And you can forget about watching TV since a big dog will master the art of standing in front of it right when something good is about to happen because he needs attention RIGHT NOW or he will die (supposedly).  The good news is, you’ll never have to go to the bathroom alone since big dogs always have to be touching you.

Big dogs eat more.  Period.  And kibble don’t come cheap, folks – especially the premium brands.  Big puppies eat a lot more since they are growing so fast, and this usually tapers off as they get older but the food bill will still shock you every time, for a lifetime.  For the first three years of my dog’s life, her food bills topped $200 monthly.  That’s more than I spent on my own groceries, and I’m a big eater!

While the walk-in cost of going to the vet is the same whether your dog weighs 2lbs or 200lbs, you’ll pay more for everything else since medications and treatments such as anesthesia are priced by weight.  Not to mention, a lot of large and giant breeds can have health problems that can show up much earlier in life by virtue of their size.  And for some reason big dogs are super accident prone!  Pet insurance is worth buying and will be more expensive for large and giant breed owners by at least double.  Good times.

YOU WANT THE BIGGEST DOG? TRAIN IT TO BE THE BEST DOG

Training is the biggest factor when considering a Superpuppy.  Don’t let the “gentle giant” moniker lull you into a false sense of security. My dog was nearly 100lbs by the time she hit six months of age.  We all know that six month old puppies can be downright naughty as they enter their teenage phase, and at 100lbs they can really make you tear your hair out (I’m still growing out my bald patches, almost five years later).  Big dogs don’t grow brains until their third birthday – fact.

The general rule of thumb for large or giant breed puppies is to set the standard for the puppy as you would expect of the adult dog.  Stick to this rule because in a few short months (or even weeks!) they will outweigh the average adult dog and they’ll just keep right on growing.  Time is not on your side.  Bad behaviours that smaller dogs can get away with absolutely will not go unnoticed with a big dog and can even become a serious safety issue.  In the event that behaviour problems such as aggression do occur, a dog’s size can make managing its environment and exposure to triggers particularly challenging and sometimes impossible.

A large or giant dog can inflict serious damage with little effort – be it through vigorous play (or even dog fights – yes, gentle giants can and do fight), jumping up on a child or elderly person, tearing up your $3000 mattress in minutes, or pulling you into busy traffic after a squirrel.  Get them into training classes as soon as they come home, and socialise, socialise, socialise them with all types of people, children, places, and dogs of all sizes.  Most large dogs have absolutely no idea how big they are and they need to learn how to control themselves starting at a very young age.

WHEN ALL IS SAID AND DONE…

Having said all this, sharing your life with a big dog is a really really lovely privilege.  Even though my bank account hurts constantly, my grass is super ugly, and I sometimes get fat lips thanks to dane-sized head butts, life is good.  I must be crazy!