Getting Over the Hump: Why Does My Dog Hump and What can I DO???? 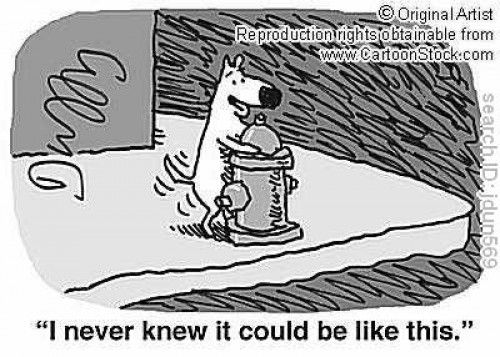 I’ve spent many, MANY days in the dog park over the last 10 years. I’ve seen all-out brawls over poop (poopie pointers), yelling matches about choke collars, and inquisitions about un-neutered dogs. But I can honestly say that nothing brings people’s opinions out of the wood work like humping. Without fail, people are experts on this behaviour. You can probably guess what the typical explanation for this behaviour is…everyone at once now…DOMINANCE! Despite the myriad explanations out there, I’m going to go out on a limb and say something a little different.  Is it possible that this behaviour could have anything to do with (insert gasp) SEX??! I apologize if I’m offending anyone’s sensibilities here, but it must be said: your dogs enjoy it.

Before I lose half my readership, let me explain. Dogs are blessed with these wonderful, built-in biological phenomena called Fixed Action Patterns (FAP). These are behaviours that our dogs, and plenty of other animals, don’t have to think about…they just happen as a response to whatever’s going on in the environment. Here’s where I might call to mind a 10 week old puppy’s desire to shake and kill that squeaky plush toy, or your dog’s natural desire to run away when chased. These FAP’s fall under four categories: Fight, Flight, Food and Reproduction. Because there is so much variation in dogs as we know them today, we might not see the same FAP’s show up in every single dog. One dog might be obsessed with chase (flight), while another may be really stingy about sharing his toys (fight). Every dog is different. As a dog culture we seem to have become a little “buttoned-up”. While we may be able to accept that play imitates life in all other avenues, we’re unable to include sex in that repertoire. I know, readers, these are your babies. The thought of your baby actually rehearsing the sex act makes you want to send him to boarding school. But don’t worry!

“Dogs are blessed with these wonderful, built-in biological phenomena called Fixed Action Patterns (FAP). These are behaviours that our dogs, and plenty of other animals, don’t have to think about…they just happen as a response to whatever’s going on in the environment.”

There’s one very important distinction I need to make. When dogs play with each other they communicate using “meta-signals”. A meta-signal is a cue that says “don’t worry, we’re just faking”. Think play bows, bouncing, wiggling, play faces etc.

So now you’re thinking, “If dogs are just imitating life, then why on earth does my female hump”? Don’t fret, I have your answer. Jean Donaldson references a study done on rats where they found that female rats will attempt to solicit sex with a lazy male rat by humping him first. What a great life that male rat has…doesn’t even have to work for it! However, most often in our own domestic dogs I’ve found that humping has become a way for one dog to solicit play from another. The dog on the “receiving” end will find it hard to ignore that kind of invitation, although I can’t say the same for myself.

So what do you do? If you’re really intent on NOT letting it happen I would suggest becoming more aware of when it’s more likely to happen. It often goes hand-in-hand with high levels of excitement. Interrupt play more often than you typically would. However, I say if the other dog is willing then let them go for it! If the other dog is clearly not enjoying himself (no doesn’t mean “yes” later) and is cowering, hiding or tucking his tail, be sure to intervene.

If you’re curious about how to make sure your puppy is comfortable with all kind of dogs in all kinds of situations then set him up to succeed with our PDF Guide to Puppy Socialization 101.