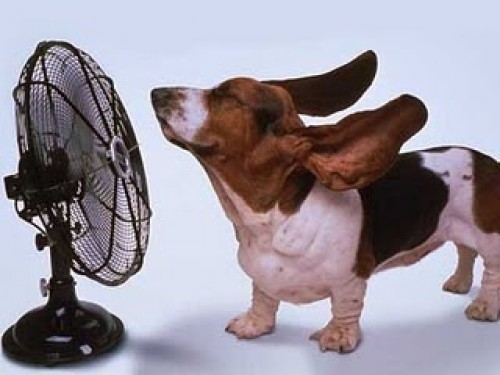 When I was a dog walker I used to walk this fabulous little pug named Stella.  She’s chubby in the cutest way possible and she’s got that speed that you wouldn’t expect from a dog so, ahem, un-athletic.  Unfortunately for me, Stella insisted on doing laps despite the insane humidity.  Our dogs just don’t seem to get it. Although it may seem cute and, at the time, hilarious, it can be downright dangerous. While she was  blissfully darting around the park her body temperature was rising, and so were the potential risks.

So Just What is Heat Stroke????

The fancy term for heat stroke  is non-fever hyperthermia.  What it means is basically that the temperature gets so hot for your dog that she’s unable to cool herself down.  Dogs are already at a distinct disadvantage with regards to heat expulsion: They can only cool down by panting, through the pads of their feet, or their noses.  Probably not the most effective system on a good day.  Now throw in the fact that a dog like Stella (and any other short nosed breeds-Brachycephalic), has a hard time panting because of the shape of her nose.  What we’re left with is a seriously high-risk situation.

A common misconception is that heat stroke is caused by a lack of water.  While that can definitely be a contributing factor it isn’t always the cause.  Dehydration is caused when there is more water leaving the body than being taken in.  See the difference? You can become dehydrated (and so can your dog) even when it’s cool out or when you don’t have a fever.  Heat stroke, however, is caused by excessive  HEAT, whether external (summer) or internal (fever).  Heat stroke happens most often when a person moves from somewhere cold to somewhere hot and the change in temperature is a shock to the dog’s system.  It also happens during a change in season from cool to hot weather…now do you understand why all our dogs are struggling right now? Early summer often catches us unaware and we continue to stick to our routine as it was BEFORE the heat hit.

How Do You Recognize It???

In the beginning stages your dog will often seem unusually restless.  It translates as pacing, perhaps whining and a general anxiousness.  Look for panting that starts, then stops, then starts again in waves. Also look out for excessive salivation, foaming at the mouth, dry “tacky” gums or difficulty breathing.

As things progress it starts to get more serious.   Here’s where you might see vomitting, diarrhea, confusion, and lack of muscular control.  If things are allowed to progress beyond this point the dog finally becomes listless and and weak and will eventually succumb.

Be careful not to make the mistake of trying to ice your dog down or pour freezing water on him.  The change in temperature can be too much of a shock to his system.  Rather, try to get him to a cool place, preferably in a cool (but not cold) bath and keep splashing water on his chest and feet.  A damp, cool towel can work too, if you don’t have access to a bath of any kind.

Pay attention to your dog.  If it’s hot out, honestly just don’t chance it.  Keep your walks under half an hour and stay in cool places or by some water.  Just because we don’t want to deal with a hyperactive under-exercised terrier-ist doesn’t mean we should risk his life.